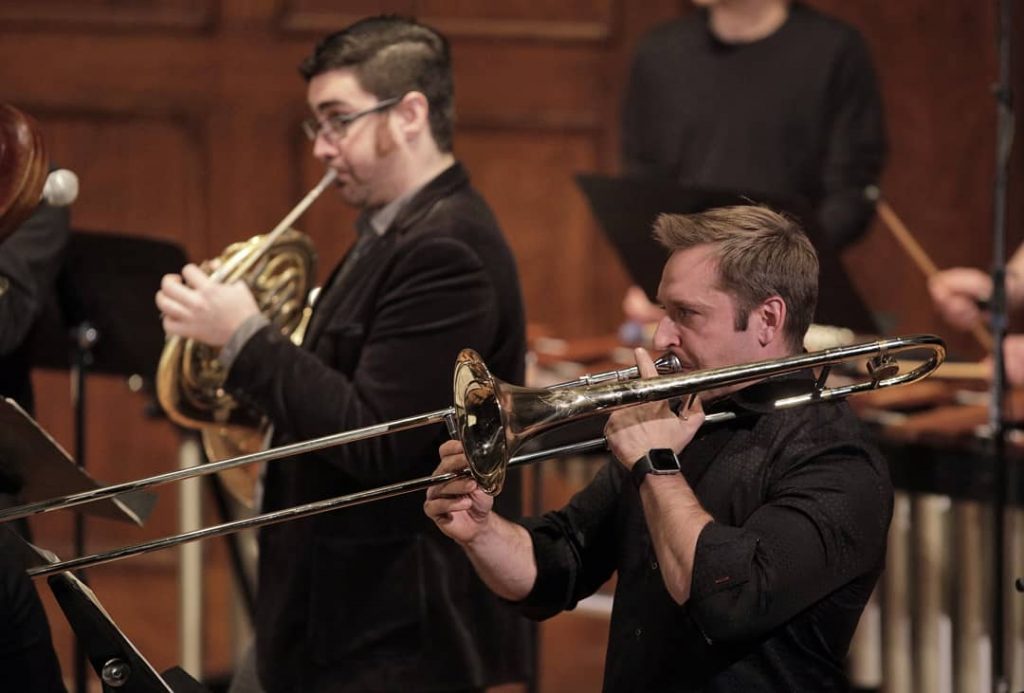 Michael Clayville is a musician who is passionate about drawing audiences deeply into the art of sound. His abilities as a trombone soloist, chamber musician, and improviser have taken him to prestigious venues around the world including Carnegie Hall, Walt Disney Hall, the Barbican (London) and the Muziekgebouw aan ’t IJ (Amsterdam) and have led to him working with some of the most prominent classical and popular artists today including Pulitzer Prize-winning composers Steve Reich, Tyshawn Sorey, John Luther Adams, Charles Wuorinen, and David Lang, and experimental groups like Medeski Martin and Wood, and the Dirty Projectors. Michael is a founding member of Alarm Will Sound, a group that has been awarded the ASCAP Concert Music Award for “the virtuosity, passion and commitment with which they perform and champion the repertory for the 21st century” and which has been called the “future of classical music” by the New York Times. In addition to being its trombonist, Michael Clayville is also the Director of Marketing for Alarm Will Sound. As a recording artist Michael can be heard on Nonesuch Records, Decca, Cantaloupe Records, Klavier, and Mark Records. Committed to expanding the role of what it means to be a 21st century musician, his work often takes him beyond the concert hall and into the broader community and frequently involve extra-musical elements including movement, lighting, and video. Michael Clayville is proud to serve on faculty at Lawrence University where he teaches courses on entrepreneurship and innovation, directs the New Music Ensemble, and coaches chamber ensembles. Michael is a graduate of Rice University’s Shepherd School of Music and the Eastman School of Music.

I am a performer and educator. I currently play with Alarm Will Sound, teach at Lawrence University, and freelance. I spent seven years in south central Pennsylvania teaching at Dickinson College and Messiah College.

I’m drawn to sounds and music for their ability to evoke emotions. It astounded me when I was four (and still does today) that “noise” and particularly arrangements of them can produce strong feelings. I began playing the trombone in fourth grade after deciding it was the strangest of the instruments. It appeared more plumbing than instrument (the whole scene made even funnier with the player moving his arm back and forth).

Through music I’ve been lucky to meet many incredible people and to go many fantastic places.

Early on I studied with James Erdman, former soloist with the “President’s Own” Marine Band. Accepted into the band at 17, he was second youngest musician (after Sousa) to ever play with the group. Jim’s lessons stressed the responsibility of the performer to communicate the thoughts of the composer.

I then attended the Eastman School of Music (bachelor of music ’00)  where I studied with John Marcellus. With Marcellus I learned the importance of flexibility and constant readiness. I soloed with the Eastman Trombone Choir on their spring tour in 1999, traveled with the group across the US as well as to Germany and the Netherlands, and recorded an album of trombone choir repertoire with them. While at Eastman I was also part of the Wind Ensemble Japan Tour and the Heidelberg Festspielorchester in the summer of 2000.

After graduating I spent three years playing with the Monumental Brass Quintet in Washington DC, at a dinner theater in Lancaster, PA and with Alarm Will Sound. Times were tough but I learned a lot about performing, organization and the business of music. When an opportunity arose to go to graduate school with three friends as part of NOVUS, a trombone quartet, I jumped. NOVUS became the first trombone quartet to ever be in residence at the Norfolk Chamber Music Festival, and we won the International Trombone Association’s Quartet Competition in 2004. When we decided to attend the Shepherd School of Music at Rice University (master of music ’05) we became their first-ever brass ensemble in residence. While at Rice, I studied with David Waters. David was a great man who taught me much about citizenship and the value of hard work. NOVUS commissioned twelve new works for trombone quartet from Chris Brubeck, Mike Davis, Michaela Eremiasova, George Thatcher and others.

Since Rice I’ve focused my energy on Alarm Will Sound and my teaching at Lawrence University. As a member of AWS I’ve premiered works by John Adams, John Luther Adams, King Britt, Donnacha Dennehy, Aaron Jay Kernis, David T. Little, Roger Reynolds, David Lang, Tyshawn Sorey and many others and have performed at Lincoln Center, Carnegie Hall, Walt Disney Concert Hall, the Barbican in London, the Muziekgebouw in Amsterdam, the Kitchen, the Whitney Museum and other venues around the world.

I am a Shires Artist.