I got a pBone Mini in the mail on Friday and spent the weekend messing around with it. I’m not going to go into as much detail as I did with the first pBone. Much of the design is the same… only smaller. It’s essentially a plastic alto trombone, that is, a trombone pitched a fourth higher (in E flat) than a tenor or bass trombone. The slide is just as scratchy as the first pBone but this model comes with some tips for care that informs the user that the slide will break in with use. 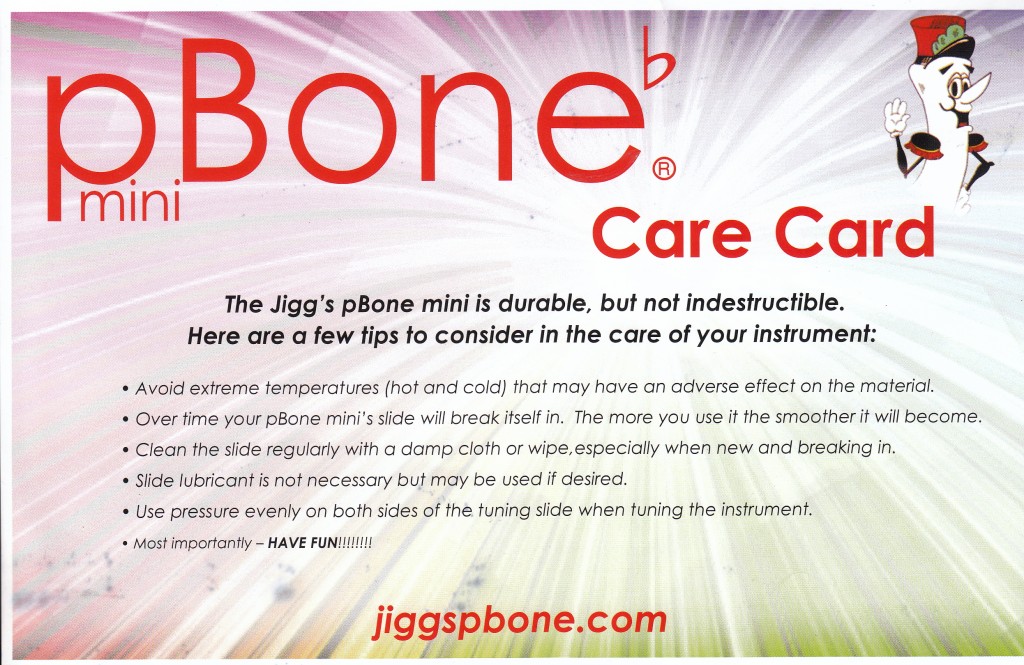 tl;dr: Could be a fantastic horn for extra young, beginner trombonists though I have slight reservations about the lack of focus but that may be from my deficiencies playing alto.

Update: upon further messing around with the horn I’ve discovered it has a major leak.

Update 2: I’m working with the distributor and Conn-Selmer to get this resolved. I should have a replacement pBone Mini by Monday evening. I’ll do another assessment once I have that instrument.

Playing first impressions: the sound is difficult to focus. The first harmonic, especially, doesn’t “slot” comfortably. The ability to focus and move between the overtones is the first criteria I use to rate an instrument. A good horn will focus on each pitch, will allow an easy transition between the harmonics and will be relatively in tune. Unfortunately, pitch isn’t great on this instrument. I’ll confess, I’m not the world’s greatest alto player so I’d love to hear the impressions of someone who spends time on one each day. I’m hoping /expecting that as time goes by focus will become a bit better.

BUT… I didn’t buy this horn for me to play the “Rhenish” on. I bought it for my daughter. She’s almost three. When I heard about the horn the first thing I thought of was an article from the ITA Journal in 1996. It talked about a European teacher using alto trombones as beginner instruments. 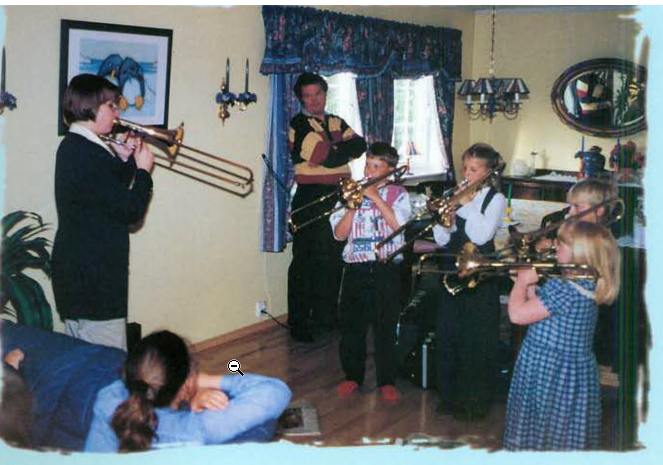 I’d never trust my daughter with a metal instrument (she’d drop it in a second) but a plastic horn might be manageable.

I videotaped her first attempt on the pBone mini. She’s tried to play on the tenor before without success. This however was fantastic. She had a great time, and as I’m typing she’s asking if she can play again.

2 replies on “The pBone Mini”

Our daughter is 3 also and I was thinking of getting her one. How do you start your daughter to play? Ours buzzes very well on tuba for a while now.

I started her with just the mouthpiece and progressed to the pBone. She hears and sees me play all the time so she has a sense of what to do and what it can sound like so she’ll imitate me a bit. We do lots of singing together and I don’t pressure her to play the trombone. The instrument sits out and is accessible to her when she wants it, she’ll pick it up and make some sounds occasionally. We’ll see if it goes anywhere. 🙂